We debate amongst ourselves. By we, I mean the ones who waited as I did, and who came away with a scar that mirrors mine.

Would it be better to have been sick from the start than to get sick in the middle? Would we have coped better than we did?

Do people look at us differently now? Do we give a fuck?

We endured the same hardship, but of course we are each individual.

One says in relation to almost everything, as he rolls along now, one restful night’s sleep after another: “I don’t regard [x] as a problem, because I know what a real problem is”.

Another says: “Fuck you, do you know what I’ve been through? I don’t care if you like me or not”.

I wonder if it has changed me at all. I wonder if all my perspective was used up after my father died.

I can assure you I didn’t give a toss about my Junior Cert the following year.

Does perspective in fact have a shelf life? I think mine did.

But then, I shouldn’t give myself a hard time. This evening course I’m taking at the moment? I went last night, and it was all about how stress relates to cardiac events.

There was a scale drawn up in the seventies, rating how your chances of cardiac events increased dramatically when you were hit with shades of hell on earth.

Death of a loved one, marital breakdown, job loss, serious illness – they all break you a little.

The last 30 years have put my score ahead of the average, and the odds for my heart aren’t great really.

But then, Christmas made that list too, as an event that can be so trying it can damage the most fragile organ that represents life itself.

Today marks the first anniversary of my transplant.

I don’t know where to put myself. Whether to sit or walk or run as fast as I can. Or kneel on a pew somewhere and cry my heart out for where I was and where I am, and for that unknown person who saved me.

It seems impossible that it has been a year already. Some are congratulating me on it, but that seems ill-fitting as a sentiment. Time has passed, that is all.

When I was sick, time cheated me by sentencing me to wasted hours on treatment. In health, I have been chasing it, filling every hour and minute of it, trying desperately to make it count, and I don’t know if I’ve done enough.

There’s a song we used to love when we were students and young enough to be so delighted by a new experience that we took the music of it away with us.

We went to see ‘Rent’ the summer of our first year in college, and for weeks afterward we sang of the 525,600 minutes that make up a year and how best to measure them.

I have probably written of this before, because though time is necessary as a record of human life lived, it is useless for the one who seeks out meaning in a mystery such as mine.

In shifting and mooching about this special day, I have come up with some units that apply to one girl, two crap kidneys and a miracle, and I measure the year that has been in the following way:

In Degrees: The warmth that has returned to my body since my new kidney lifted the curse of anaemia. The sporadic shivering fits are gone. My hands are no longer blue.

In Hours past Midnight: Freed from the non-negotiable curfew of the dialysis regime that required me to spend nine hours each night in the company of a machine rather than friends, there have been nights that became mornings with but an hour or two in the bed.

In Brussel sprouts: It was an emotional Christmas. Jesus, the happiness of me this year. I ate enough at dinner to make up for the previous years of restricted diet. In 2011, I was allowed five Brussel sprouts. Five for each prong of the fork in 2012.

In hospital visits: The consultant demands more visits and more blood now than ever before. There is so much to lose. I did spend one night in hospital in October when chicken that should have been binned rather than plated up made me so sick that I couldn’t stop throwing up and I had to hit for the A&E in the Mater on All-Ireland hurling final day. I survived. Kidney marched on.

In staple marks: My scar doesn’t look too shabby at all. It has healed to the point where it’s a light pink line, but the little holes from the staples that held me together are there. Little dots - 32 of them in all.

In happy days: The happiest by far was the day of discharge from hospital. Going home to everything that was familiar but returning in a different form. Deform actually. For I was swollen and my kidney sat out and practically waved at passers-by, it was that obvious. My brother collected me and delivered me to my apartment, where balloons had been fixed to the door. Finding my mother inside - she who normally only leaves the home county for graduations in the capital – and the three of us sat there, eating chips, and her saying over and over again: “Well, thank God, that’s all I’ll say”.

In panic attacks: It would be wrong to frame it all in positivity, when the reality as any transplant recipient will tell you does come laced with paranoia and with worry and with trying to figure out how to start everything again. A hostage released. The world that awaits is blinding and terrifying in its abundance of opportunities, and there were many points at which I hesitated and retreated, overwhelmed. It is not helped by the medication, which they tell you can cause anxiety. It hits at night in particular, and it can be crippling. I am learning to deal with it.

In moments of thanks: I know enough now to appreciate the value of stopping in the midst and in the middle. Revelry is best appreciated when it is interrupted by a good look around and acknowledgement that life is brilliant. Stood in a field at a concert, sitting on a plane about to take off to places I wrote on bucket lists of destinations when travel wasn’t possible, stood at an altar to witness a best friend getting married, sat watching ‘The Snowman’ with my nieces on Christmas Eve. I may measure time, but I count blessings.

In hair lost: It is still falling out, and I have been officially diagnosed with alopecia. My hair was extremely thick, so it is not so noticeable to those who didn’t know me when my ponytail was so full that some hair grips used to break under the pressure of trying to hold it all in there. It was distressing at first, to have strands and strands of hair coming away in my hands. It still makes me a little sad. A few years ago, this blight on my appearance would have driven me to tears, but relative to everything that has gone on, it is minor. And I don’t worry so much about how I look anymore. I love my body for what it has put up with, and this is me now, scars and all.

In questionable decisions? Hell ya. Lots of them. Recklessness, thy biggest fans are the newly transplanted.

To mark this anniversary, one meeting was necessary and yesterday there was dinner with the girl who carries the kidney that matches mine. She is where I am, if a few hours behind, because I was transplanted first.

At the outset, they ask you in the hospital ‘what day is this?’, querying how long your kidney has been inside you.

This morning, I had breakfast with a friend. Then I travelled upwards, to get away from footpaths, and order, and strangers. It must be the country in me. Up to the higher ground, where there was quiet and solitude.

To be without company for a time today is appropriate because to be sick is to be alone in many ways and I will never forget that. If you’re lucky, when health returns you are not weighed down with an incurable glut of bitterness and you can re-join the conversations and the circles you belonged to before.

I am that lucky and tonight there will be others to come along and sit beside me and remind me that for all my oddness, and for the memories of the tough years that I still carry and still cry over, there are many who love me and who want to be there to raise a glass on this day of all days.

This Limbo
An update on this fun-loving non-smoker, social drinker (29), who for so long searched for a new lease of life. She finally found her perfect match on January 13, 2012. Together, they have plans for travel, lavish dinners, full nights' sleep, and a lot of laughter. There are high hopes that they will live happily ever after. 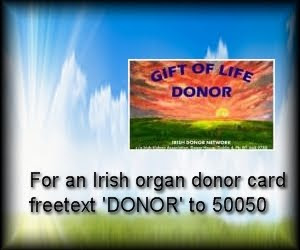